Halder used to use a partially automated combination of pallet shelves and storage lifts to make this large product range with its assembled parts and semi-finished products. “As our offer increased continually, warehousing with this system become more and more elaborate due to increased numbers of top-up runs between the pallet shelves and storage lifts.

The capacity also had to be increased. Options were limited in the previous system. We would have had to erect a new building,” says head of operations Michael Dunz. He adds: It was only logical to choose an entirely new intralogistics system.”

Merger of Logistics and Production Into One

Halder wanted to use the conversion to a new warehouse and material transport system to improve other factors as well: the existing hall was to be better used and unnecessary work that did not add value, such as top-up runs and interim storage, were to be eliminated. The new warehouse management was to help with this as well.

Erwin Halder found the autonomous robotic carriers (ARC3) of Servus Intralogistics from Dornbirn (AT) to be the perfect solution. They save time for Halder by supplying the worker or production just-in-time by the pull-principles. They save space because Ser- vus uses what space is available with great efficiency. “Our robotic carriers may not run overhead on the hall ceiling at Halder, as they usually would, but we were able to implement the Servus system with a relatively small footprint anyway,” explains Christian Beer, owner and managing director of Servus Intralogistics. This was possible even though Servus connects the areas of goods receipt, picking ASRS (automated storage and retrieval system) without interfaces, while also directly supplying assembly.

We are able to store a larger number of items without having to expand our hall capacity. Head of operations Michael Dunz

Everything from a Single Source

The delivery scope of Servus included all work stations, such as picking, assembly connection, goods receipt and outbound goods, with the corresponding I-Points (Human-Machine-Interface), and the automated storage and retrieval system (ASRS) with warehouse management software. “Our customers can not only use the greatest storage density of our ASRSs, but also the benefit of having their warehouse filled to more than 99 percent,” says Beer.

Flexibly Into the Future in Spite of Automation

Two years have passed since commissioning. Head of operations Michael Dunz now knows that all expectations have come true to his complete satisfaction: “The transport system was perfectly aligned with our requirements. We improved material flows and shortened throughput times. Circulation stocks, interim storage and waiting times have been greatly reduced. Workers receive the goods they need just-in-time at their work stations. The Servus system is so flexible that we can easily adjust or expand it for larger orders received or changing production processes.” Halder and Servus thereby showed that automation and flexibility do not need to exclude each other. 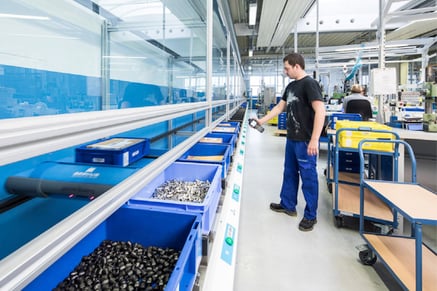 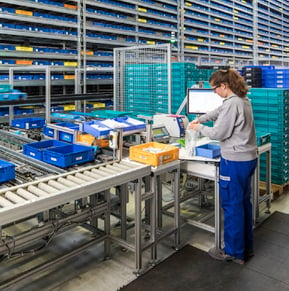 The robotic carriers of Servus supply assembly directly at Halder. Pick-by-Light tells the worker which box to be retrieved next. The work stations were placed right at the ASRS. The compact build efficiently used the available space.

Current trends and information on intralogistics can be found in the new SERVUS Whitepaper: